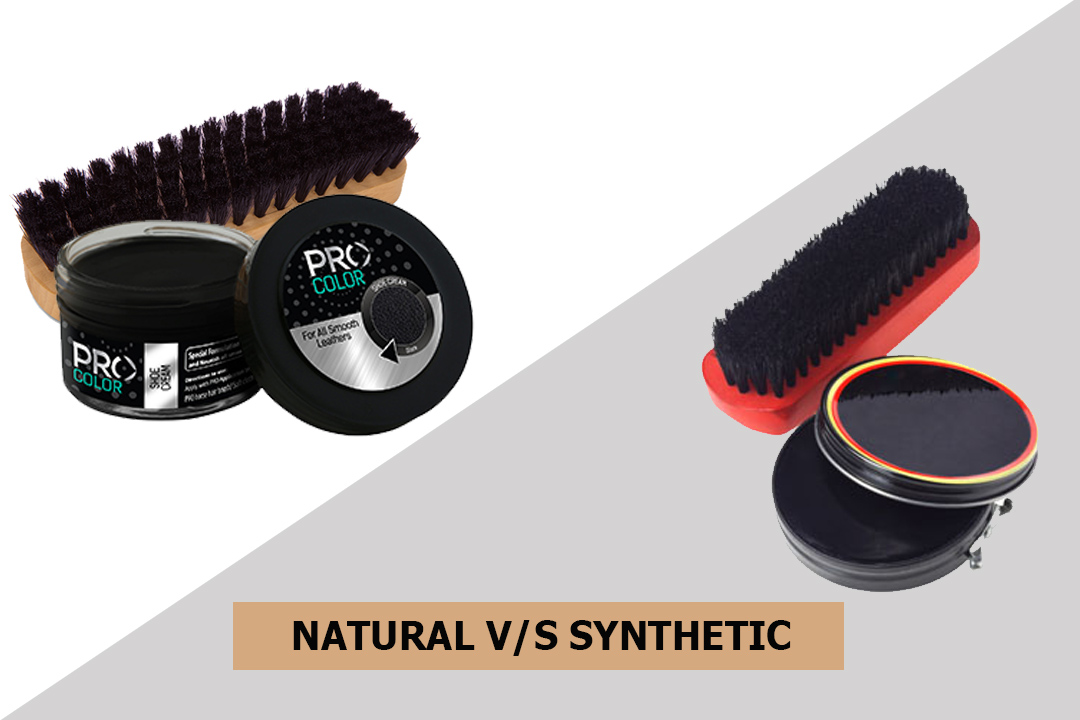 Did you think shoe polish can be defined as being natural or synthetic?

But there is a considerable difference between synthetic and natural shoe polish or shoe care products.

Our blog will explore these differences in detail, and you will reconsider buying regular shoe polish for your leather after then.
If you want to learn more about the difference between shoe polish and shoe cream, you can read our blog Buy leather conditioner for shoes from PRO (propremiumcare.com)

Synthetic, as the name suggests, is not natural, made with chemicals. For example, silicon is a common chemical used in shoe polish. Silicone oil can give corium and artificial leather gloss and brightness. A composition containing silicone grease also provides water-repellent properties for these materials that are designed to keep them from getting wet in the first place! However, chemical-based shoe polish makes a silicone layer over the leather, thus sealing and depriving the leather of air to breathe. This leads to deterioration of leather and its texture over time, and the shoe starts to lose its shine and suppleness as you use it. Repeated use of silicon on shoes can look bad, lacking their luster and making them uncomfortable to wear. Would you like your shoe to be in that state? Hell No!

Are all shoe polishes Synthetic? How to identify synthetic shoe polish?

Not all shoe polish sold is synthetic. However, most varieties sold in supermarkets have silicon in them. Therefore, it becomes essential to read labels when picking shoe polish. Generally speaking, silicon-based shoe polishes will be cheaper than natural ones.

Leather polish comes with nature; the rich texture of the original leather product needs natural care. Carnauba wax and beeswax are two of the most common resins to rejuvenate leather shine and take care of them. These waxes deeply penetrate the leather, making it breathe, shine, and be lithe, making the shoe sustain for a long time, giving you a ‘new feel’ in look and comfort throughout its life.

Why is the wax used on leather?

Wax polish protects your shoes from scuffs, scratches, and waxes prevent water absorption. Wax polish is a great way to keep your shoes looking like new even after wearing them all day long. This product’s high concentration of hard waxes will protect the shoe from water, light scuffs, and scratches, so they stay beautiful!

Where do you source Natural wax for leather care?

Carnauba Wax is a natural plant wax used in many products and applications. It comes from the fronds of carnauba trees, found only on Brazil’s coastlines where it can be harvested without harming any wildlife or vegetation. PRO premium ensures that it sources carnauba wax from this very source without harming the environment.

What are the various uses of carnauba wax?

Carnauba wax is used in multiple industries, it is used in the Cosmetic Industry, Pharmaceuticals, Leather, and Cars. Carnauba wax is often found in the mixture of car, shoe, and floor polish. It also shines on produce like apples or cucumbers to give them their shiny appearance while adding protection from damage caused by dirt particles that are stuck between one’s teeth when they bite into these fruits!

So, what are the pros and cons of synthetic shoe polish? First, synthetics tend to be less expensive. They also dry quickly- an important feature if you’re in a hurry. However, they can also be harsh on your leather and leave a residue or film behind. In contrast, natural shoe polishes use ingredients like beeswax, which act as a sealant and protect your shoes from water damage. They also nourish the leather, keeping it soft and supple. However, they can take longer to apply and may not give you quite the same shine as synthetics. Ultimately, it’s up to you whether you prefer the look and feel of synthetic or natural shoe polish- just make sure you know what you